I got The Long Path Home by Ellen Lindseth, for a fair and honest review form NetGalley

The Long Path Home, tells the story of Vi a burlesque dancer in Chicago who ran away from home when she was fifteen, after getting pregnant, by her sisters fiancée. The book opens after Vi has just finished a show, when Vi is taken to a a house with a hit man. While there instead of having sex with him Vi uses a drug to knocked him out and lays him out in such a way that, when he wakes up the hit man thinks he had had sex Vi then leaves only to find the next day that the person she drugged was shot and Vi is wanted by the police for the murder. The only hope Vi has of getting out of Chicago is arranged by her friend and boss Sal who Arranges for her to help protect the the daughter of a Mafia boss, who as run away to work with the USO to entertain the American troops in Europe.

The main character Vi has grown up, during her time in Chicago, giving her son up for adoption, but the life she led, is not the type that they want the USO want in their shows, To this end Vi has to take on a new persona however this can lead to even more trouble not only with her fellow cast members as well as Sargent Danger a GI who is their to help the cast while they are in a war zone.

The story Arc of The Long Path Home could have been as a basic redemption story of the main character. However what the writer Ellen Lindseth does is take This well known basic story were you learn about USO in World War II and turns it in to a war time thriller.

I can highly recommend you should read this well written and surprising Thriller by,  Ellen Lindseth latest book The Long Path home.

Mark's ReaderRank
Mark has reviewed 123 books with an average rating of 3.992 out of 5.
16 people have found Mark's written reviews to be helpful on Goodreads.
See more... 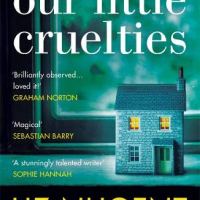